Whether you have purposely put your guinea pig sow with a boar (male), or whether you have noticed your sow becoming very pearshaped lately, her care will be the same. Guinea pig females (sows) generally give birth and care for 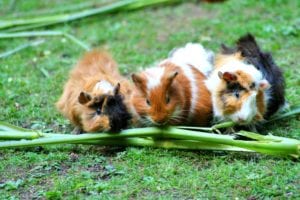 young very quickly, provided they are in good health and well-fed themselves.

The pregnancy of guinea pigs lasts 63 to 70 days, larger litters having a shorter gestation, and at the end of pregnancy, the sow will often have become alarmingly large! The first consideration is to provide separate housing for the boar because although he can safely be left with the sow and her piglets, the sow will become pregnant again on the day she gives birth unless the male has been removed from the cage prior to this. During pregnancy, the sow’s requirement for vitamin C doubles, to 20mg daily, and so very fresh fruit or vegetables must be given daily. Fresh food stored in the fridge, or cut into pieces, will lose a lot of its vitamin C after only a few hours. Also, the sow will need twice as much food as usual. The bedding must be kept fresh and clean, as ammonia fumes from wet bedding are damaging to the piglets.

In most cases, you will check your sow one day and find that she has regained a svelte shape, and has two, three or even more perfect miniature guinea pigs with her. Now you must feed her three times as much because the piglets will begin to eat solid food at 2 to 3 days old. Although the sow has only two teats, she will feed several piglets quite happily as long as she herself is well fed.

While a sow has a litter of piglets, she should be given as broad a range of her usual foods as possible. This is because the piglets “learn” what is “good food” and what isn’t, in the first two weeks or so of life, from nibbling with the sow. If only one or two foods are offered, the piglets may be very reluctant to eat unfamiliar foods when they go to a new home, and may starve themselves. If the sow and her family eat all the food that is given them, then give more next time. Any food that is broken or dirty will not be eaten, and should be removed and replaced with fresh. As a general guide, you should feed ad-lib guinea pig pellets and water, and a handful of grass, fruit or veggies per guinea pig, per day. The piglets can be weighed in a small kitchen type scales to make sure they are gaining weight satisfactorily. They will typically be around 100gm at birth and should gain weight steadily.

The piglets can be weaned at three to four weeks old, or when they weigh 250gm. If there is a large litter, the males should be weaned first, into a separate cage, and then the females 2 to 3 days later. This avoids the risk of an udder infection if the sow has been producing lots of milk. Male piglets must be separated by four weeks old or breeding between littermates may occur.