What is the cause of fight wounds on a cat? 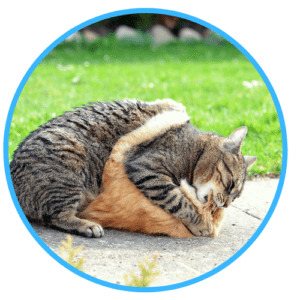 Over 90% of septic wounds in cats result from cat bites sustained during a cat fight. Dog, rat and other rodent bites can occur but they are much rarer.

Why do cats fight?

Cats are very territorial. They fight with other cats to protect their territory or to acquire more territory. As a result fight wounds are common in cats. Fight wounds frequently result in infection that can make cats quite ill particularly if they are left untreated. Fight wounds are more common in male cats than females and most frequent in entire Tom cats.

My male cat has been neutered. Why does he still fight?

Entire male cats are very territorial; they will defend an area around their home but try continually to expand the borders of their territory. The desire for more territory and the need to keep intruders off their existing territory means that they are constantly fighting with other cats. In contrast neutered male cats defend a smaller area of territory around their home. If this territory is breached by another cat they will defend it by fighting. The frequency of fighting will depend on the number of cats in the neighbourhood and particularly the presence of entire Tom cats. Female cats will also defend their territory.

What can I do to stop my cat being bitten?

As discussed above neutering is advisable but this will not completely eliminate fighting. Confining the cat to your house particularly at night when cat fights are most common will reduce the number of bites your cat sustains.

What happens after a cat has been bitten?

When a cat bites its teeth go through the skin and then it releases. This leaves small puncture wounds in the skin which rapidly seal over within hours trapping bacteria from the cat’s mouth under the skin of the victim. The bacteria multiply under the skin. For several days there may be little or no sign of infection (although observant owners may notice lameness and scratches which result from the fight). Later swelling and pain at the puncture sight are noticed. The cat may also run a fever. If the site of the bite is covered by loose skin a pocket of pus will develop forming an abscess. In areas where the skin is not loose such as on the foot or the tail the infection spreads through the tissues and causes a cellulitis.

What should I do if I know my cat has just been bitten?

If you know that your cat has bite wounds antibiotics given within 24 hours by your vet will usually stop the spread of infection and development of an abscess. If several days have elapsed since the fight an abscess will usually form. Some vets prescribe antibiotics to be given immediately after a fight in individuals prone to fighting.

How will I know that my cat has a fight wound if I can’t find any bite marks?

Puncture wounds heal very quickly so often there can be nothing left to see or feel. The most common sites of bites are on the head, forelimbs or at the base of the tail. If cats have been bitten on a limb this will often be painful and they will be lame on it or may not use it at all. It may be possible to feel heat and swelling in the area of the bite. Some cats may just be lethargic and have a temperature. Frequently scratches can be felt in the coat by observant owners just after the fight.

What should I do if my cat gets an abscess or infected bite wound?

You should take your cat to the vet. If an abscess is present the vet will drain it. This can sometimes be done by removing the crusts over the original bite wounds or if these have healed by lancing the skin over the abscess. Most vets sedate or anaesthetise your cat to do this. If cellulitis occurs drainage is not possible.

Antibiotics will be given either by injection or tablets. If the vet prescribes antibiotic tablets for you to give to your cat it is very important that you give all the tablets as directed and complete the course.

How should I manage the wound after the vet has treated it?

After your vet has drained an abscess quite a large wound may be left. This is usually left open to allow for drainage. It is advisable to bath the wound twice a day to keep it open for two to three days. This is best done with surgical swabs and warm salt water (1 teaspoon of salt to half a pint of previously boiled water). Never use disinfectants.

How long will it take for the bite wound to heal?

With appropriate treatment abscesses should heal within 5-10 days, cellulitis may take a little longer. If you feel the wound is not healing normally you should ask your vet to reinspect it.

If no treatment is given there is a danger that the abscess will burst and then only partially drain before healing over and then recurring. Similar consequences may follow if courses of antibiotics are not completed or adequate drainage is not maintained.

If an infected wound does not heal within a few days your vet may want to do further investigations to see if there is any underlying cause or an unusual type of bacteria present. Certain viruses such as feline immunodeficiency virus and feline leukaemia virus suppress the immune system and may complicate the cat’s recovery from infection; blood tests can be done to diagnose these viral infections. A persistent draining sinus may indicate that a foreign body such as a piece of tooth or claw or soil is left in the wound and this may require surgical exploration. Alternatively it may indicate the presence of an unusual infectious agent in which case biopsies may need to be sent off for culture and other tests.

Why does my cat keep getting abscesses in the same place?

This may reflect inadequate treatment as discussed in the question above where the abscess never completely resolves. Alternatively it may reflect an individual cats method of fighting; the cat that runs away will tend always to get bitten on the tail base whereas the aggressive attacking cat will tend always to be bitten on the head or forelimbs.

Are there any other possible problems associated with fight wound infections?

Bite wounds are considered to be the main route of transmission of some important feline infections most notably feline immunodeficiency virus. Feline leukaemia virus is found in large amounts in the saliva of infected cats so transmission by biting is a possibility. Blood tests can be performed to diagnose these infections, although antibodies to the virus are not likely to be present for several weeks after the cat fight.